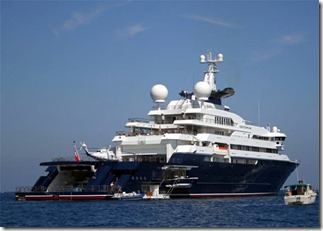 Well if you’re going to get rescued from the sea, it might as well be by Paul Allen’s 126m mega-yacht Octopus. Yes to no surprise, after burning down the Nokia platform  as I discussed in my blog post  Fair Trade with Stephen Elop , Nokia has leaped from the deck.  Today’s press release from  Nokia Nokia  adopts Windows Phone as its principal smartphone strategy changes the mobile world forever. Now the biggest player in the market for mobile and the biggest software player have united to win the market.

I had a few emails when I posted When Technology Goes Obsolete about the impending doom of the iPhone, but today I would still say it again. It’s about the software…. Ultimately the hardware field levels over time, but constant innovation on the software is what keep the platform fresh and exciting and will ultimately drive adoption. Without question the Windows Phone platform provides a much better foundation for developing those applications and there are 13 million people or more that can make the applications.

Now Nokia has placed what may be one of the biggest bets in corporate history. All the chips they have were just pushed to the center of the table on the Microsoft square. The smartphone market is the only mobile market that really matters to Google, Microsoft and Apple. They will be the last significant players in the market standing.

So just to replay. One week ago Stephen Elop officially and irreversibly burned down the Nokia platform forcing the entire Nokia organization to jump and in the process orphaned every Symbian and MeeGo developer. He had arranged for a rescue ship and today they jumped and were picked up in person by Steve Ballmer and Microsoft.

It’s not the concept that is bad. Getting a rocking Windows Phone platform for Nokia makes sense in conjunction with seeding applications that drive adoption in the key markets. It’s just how it has been done that has Nokia investors worried.

If you buy Nokia stock today you will either make a lot of money on it or lose it, but it won’t just hover. I am adding some to my portfolio despite my thoughts of the approach used.