Have you ever met Bill Gates? 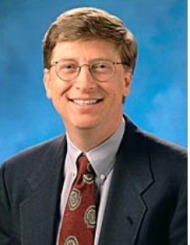 When I first joined Microsoft, this was the third most popular question people asked me behind “can you fix my PC"?” and “can you get me Office for free?”.Surprisingly the answers are yes, no and yes I have met Bill Gates.  Ever since the days of truly being amazed by Digital Research’s GEM environment and underwhelmed with version 1 of Windows, I have wanted to meet Bill Gates (1987 perhaps?), not to thank him for windows 1.0 but to tell him some improvement ideas. Later I was duly impressed with the products, the company and his leadership and sincerely wanted to shake his hand. The opportunity came in 2001 when I joined Microsoft.  Bill and I were in the same room, just him and I. I had waited for this moment but the timing didn’t seem just quite right. We were side by side, doing our business in the men’s washroom of the executive building in Redmond. Not a time to shake hands, nor a time to say just how impressed you are. So yes I have met him, but no we have not been formally introduced.

I have been involved with one project that has put me in the hallowed halls of Redmond (thanks Mayor Vic) and have had the opportunity to meet with many of Microsoft’s top executives because of it. What you learn in that process is what the word GLOBAL really means. I have been fortunate to travel the world consulting, but each project usually had a particular focus in a country. GLOBAL thinking is different. It means when I do this here, how does it replicate itself across the globe?  It is the concept or perhaps more accurately the precept of scale.

At Microsoft we are masters of scale. We make one of something and then replicate it a few hundred million times. I am not sure that any world leader, any visionary, any human that ever lived had or has  a better concept of scale than Bill Gates does.

I am heartened by the Bill and Melinda Gates foundation and his leadership of it because of the understanding of scale. Want to take on AIDS, Malaria, Cancer, Hurricanes, Poverty,  Global Warming? You need to understand scale.

My education in scale with Microsoft began with a business proposal for a new billion dollar business. While well received, I was was asked. “sure… but how does it scale?”

I now understand what they meant.

As consultants, we tend to think much too small. Boxed in by preconceived notions, standards, expected outcomes and norms. If you really want to help your client, talk to them about scale. What if they were global, what if it that web site was multi-lingual, what if it could take payments globally? What if their customer base was truly global?

This entry was posted in Consulting Excellence. Bookmark the permalink.

3 Responses to Have you ever met Bill Gates?